The biggest hunting tournament in Indonesia has just begun: the maid hunting! And no, we are not excited about it.

Attended by millions desperate housewives, who usually live in a big city, the annual event, always take place after Lebaran (Ied Al Fitri/ the Moslem Festival at the end of  Ramadan). Thousand, if not millions domestic workers usually head to their home two weeks before Lebaran, leaving their employer in desperation as they often do not want to do domestic workers. Some of this workers promise to return back to their employer, but many choose to find a new employer. One who can offer better wage and better condition.

In this patriarchal country, men do not do chores. As a consequence, women, whether they are working or not, have to do it all by themselves. Many of Indonesian women are not born to manage a household, so they rely on the assistance of the maid. A maid’s tasks in Indonesia are not only to clean the house, but also to cook and raise the children. That is why to hire one is never enough. Should there is kid in the house, a baby sitter is normally hired. A rich family will  also hire driver, security and gardener. For many middle and upper class Indonesians, a life without domestic staff are not worth living. I am too sarcastic. 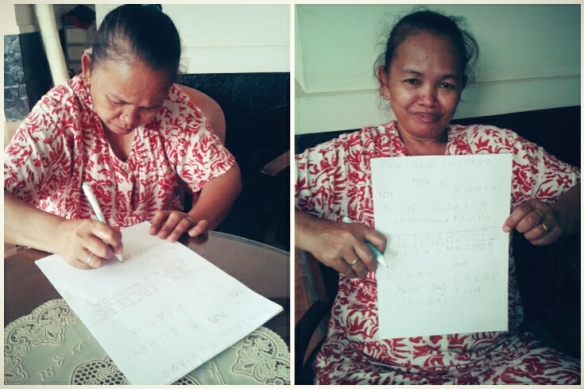 Bibi, who survived the torture from her employer and as a consequence has a hearing impairment. She does not understand sign language and reads lips to communicate with others. She is illiterate and my cousins and I took the pleasure of teaching her how to write and to read.

Forgive me for using the word maid and not domestic worker. I do not mean to insult the domestic worker, but I chose the word to to portray the real situation. Unfortunately, in Indonesia domestic workers are never considered as workers. They are merely pembantu or assistant. They do not have working agreement and their working hours are not clear. They are often have to work more than 8 hours per day and have no holiday during the weekend. Not to mention that they receive neither health insurance nor annual leaves. To make it worse, they are underpaid.

The government of Jakarta sets the minimum regional wage at 2.217.000 rupiahs (USD 222). However, live-in-maids in Jakarta receive only USD 30 – 100/ month, while baby sitters receive a bit more, from USD 120 – 240/ month. Living decently in Jakarta with that amount of money is nearly impossible but these maids, who are often uneducated, have no other choice. There is no job in their village thus, they have to work in the big cities and take whatever offered. The one with experience usually receives higher wage while the young one receive less, still they are underpaid. Note that the young maid can be as young as 13-16 years old, yes child labor exists in the household.

During lebaran, the demand for maids are very high but the supply is very low. Under this circumstance, the price for the temporary maid (or infal pembantu) is rocketing, sometimes as high as USD 10/ day. Interestingly, Indonesians are willing to pay. I remember there’s one cruel person who hired a maid during this lebaran period. This person made the maid clean her house in the morning, then send the maid to her sisters’ houses, and her cousin’s in the afternoon until the evening. She rotated the maid to different houses and make her, the maid, exhausted. The maid of course left after two days (and she moved to our house, full of anger and hatred).

When I lived in Medan, I remember that one of my aunt’s temporary maid does not know how to use stove. The maid, who was going to work in Malaysia, leaked the gas to the whole kitchen. I had to unplugged the regulator to avoid the explosion. Fortunately, there’s no flame and everyone were safe (what were I think!). This maid was going to go abroad with no knowledge on how to use household appliance. Unfortunately, many maids in Indonesia do not know how to do things and the maid agency does not bother to train them. These type of maids, who have no knowledge, are often abused by the impatient employers.

The demand for maid is not only in a household, in my kost the landlord provide maids too. One maid for 10 rooms (there are 50 rooms in my kost). They clean the rooms and do the laundry everyday, except on Sunday and bank holiday. Although they are lucky to have better working condition, they are still underpaid.

I asked around why the employers do not pay wage as per the government regulation. According to them, it is because they are live-in maid; they got free room and do not need to pay for their meal. Poor them, they have to live in small room, eat the leftover of the employer (oh yeah some employers are that cruel) and underpaid. Sounds like slavery eh?

Twelve years ago, I was at a friend’s house and we were going to have lunch together. I took a plate in the kitchen and put some rice on it. My friend said, “You took the wrong plate. That’s a plate for the maid, not for us”.

In Indonesia, maids are considered second class that even the plate has to be different. What kind of human being does that?